Planteria tell you what you need to know. 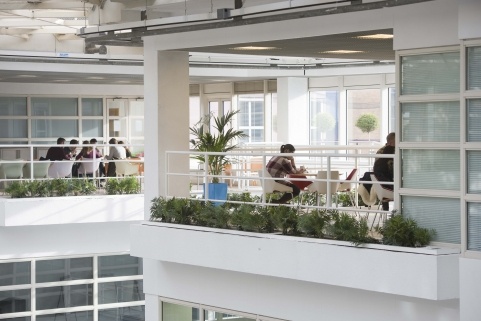 How high up on your agenda are the Plants for your Office? Learning more about this design ‘buzzword’ and the philosophy behind it is bound to change your perspective.

The word biophilia originates from the Greek, ‘philia’ meaning ‘love of’. It literally means a love of life or living things. Humans have a deeply engrained love of nature which is an intuitive and natural drive imprinted into our DNA. Researchers believe this to be a reason that we have thrived as a species, helping us to locate the most fertile land, cultivate food and nurture new life. We have a physiological need to be in contact with nature and the natural world.

Researchers have found that more than 90% of people would imagine themselves in a natural setting when asked to think of a place where they felt relaxed and calm. Being in or around nature makes us feel good, our physical and mental wellbeing depends on us spending time in a natural environment and this effects our productivity and general wellbeing too.

Psychologist, Erich Fromm, first used the word biophilia in 1964, when he described it as “the passionate love of life and all that is alive”. Biophilia as a concept became more well known in 1984 following the publishing of the book ‘Biophilia’ by Edward O Wilson, an American biologist, Wilson defined it as “the urge to affiliate with other forms of life”.

Since then, biophilia has become increasingly recognised by the scientific community and also by designers and architects. Studies have shown evidence of positive benefits of human interaction with nature, such as improved productivity, lower levels of stress, enhanced learning and even improved recovery rates following illness.

These studies have led to many architects and designers appreciating the connection between some of our modern-day ailments and the design of many modern buildings and office environments. And so biophilic design came about. Biophilic design incorporates, natural elements, maximising daylight, views of nature, natural materials and natural features such as indoor planting and water features, into architecture and interior designs.

If you’ve ever been stuck in an office with no windows, artificial light, and air-conditioning and wondered why you felt un-motivated and lethargic, you’ll understand just how important biophilia and biophilic design is.

Dr Craig Knight from Exeter University, studied the effects of soulless drab working environments for more than 10 years. The results show that employees were 15% more productive when “lean” workplaces are filled with just a few houseplants.

Knight says he had wondered for years why the business world had persisted with the trend for sparse offices. “If you put an ant into a ‘lean’ jam jar, or a gorilla in a zoo into a ‘lean’ cage – they’re miserable beasties,” he said. People in “lean” offices are no different, he added. He found that when plants were brought into the offices he studied – just one plant per square metre – employee performance on memory retention and other basic tests improved substantially.

Here at Planteria we are huge advocates of biophilia and, as you’d imagine, our offices are jam packed with beautiful plants and flowers. Plants can also be used to create natural work-space dividers, absorbing sound and creating more private spaces to work or have informal meetings. They help to keep the air clean. There are so many reasons to include plants, not forgetting that they also look great. If you want some more inspiration check out our case studies. Or contact us for some advice on how to add plants to your work space today.

We spend a great chunk of our lives at work. For some, this isn’t so bad. Walk into a high-ceilinged workspace, filled with natural light, artwork and plant life and it’s more than likely your creative ability will be invigorated. Yet these offices are few and far between, with the reality likely being a drab,…

Understanding those struggling with mental health issues is integral to building a business that can promote equal opportunities. In this article, we consider this year’s Mental Health Awareness Week theme, and how to avoid stress and friction in the workplace. We also talk about how you can help those who are suffering from mental health…